SACTWU deeply disturbed at the looting and burning of factories 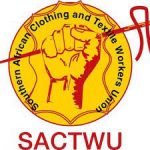 This author does not have any more posts.

The COSATU-affiliated Southern African Clothing & Textile Workers’ Union (SACTWU) voices its deep concern about the serious damage that the recent looting in KwaZulu-Natal and elsewhere has caused to workers and their families.

In particular, we are deeply disturbed at the looting and burning of factories and other workplaces.

For example, in Isithebe, a brand new clothing factory (Kingspark Manufacturers) which was set up only in September last year, has been completely destroyed. Machinery and raw materials have been looted, and nothing remains. In the process, 600 much-needed jobs supporting 3000 family members in the poorest part of the country are now lost, in this instance alone.

In recent times the management and workers of Kingspark have been successfully participating in an innovative workplace productivity collaboration pilot project – to test and demonstrate the international best practice intervention by the International Labour Organisation’s SCORE program. All their hard collaborative work to grow the company and its jobs has now been undone, and the multiplier benefits to the broader industry lost.

Similar incidences of looting and serious damage to domestic industrial infrastructure are being caused in other areas, such as in Mayville,  Section 6 in Newcastle, and elsewhere.

The consequence is that thousands more jobs could now be permanently lost.  We respect our citizens’ constitutional right to peacefully protest.  We also agree that there is a crisis of unemployment, inequality and poverty that must be solved.

However, the current lootings, arson and other forms of damage is nothing but criminality, and is counterproductive to the solving of our problems.

We cannot accept that while, together with national government and employers, we have been working extremely hard to save and create local industrial jobs,  the future sustainability of our efforts are being undermined by such horrific and un-ashamed criminal activity.

We call on the police and other law enforcement agencies to clamp down hard on such unacceptable violent conduct.  The perpetrators must be arrested and prosecuted with the full might of the law, without fear or favour.  We call on all our members, other workers and all South Africans in general to condemn this criminal conduct, and to distance themselves from it.

We extend our compassion to workers and their families,  who are the innocent victims of this shame that has been bestowed on our industry and country.

CALS response to the current state of unrest

KwaZulu-Natal and Gauteng are burning, we need to build a just peace